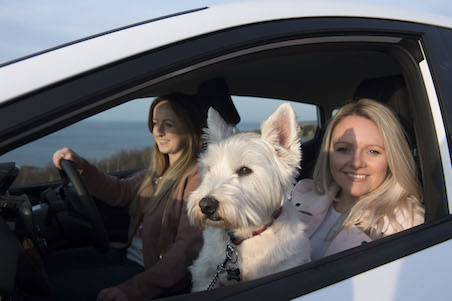 Arnold Clark Car & Van Rental has put together a list of Scottish road trips to suit every traveller.

For a wildlife adventure

From golden eagles in the Northern Isles to highland cows across the central belt, Scotland really has a lot to offer when it comes to wildlife.

For jaw-dropping views of bottlenose dolphins, head to the Moray Firth coastal line – it’s one of the most northern dolphin colonies in the world and the best place in Europe to see the marine mammals.

The Moray Firth starts near Inverness and stretches around 500 miles of coastline; the perfect route for your next #RentalRoadTrip.

Drive around half an hour from Inverness along the A832 to the famous Chanonry Point where grey seals, otters and porpoises regularly swarm the rocky shoreline. Be sure to check the tide times before your trip – low tide is the perfect condition to spot bottlenose dolphins and they’re known to put on quite a display for visitors.

If the weather’s not on your side then take a short jaunt to the Dolphin and Seal Centre at North Kessock, where you can hear dolphin calls with their special underwater microphone.

The Moray Firth also connects to Loch Ness, so make sure to get the ultimate Scottish wildlife experience and catch a glimpse of the friendly monster, Nessie.

Your Harry Potter #RentalRoadTrip starts in Edinburgh and, after a few stops in between, finishes in Lochaber. So, if you’re travelling with muggles, remember you can hire a sat nav in branch when you collect your car.

Start with breakfast in Edinburgh’s Elephant House where J.K. Rowling penned many of her books, then embark on the beautiful drive to Fort William where the magical tour begins.

Only 17 miles from Fort William via the A830, the Glenfinnan Viaduct is home to the iconic Hogwarts Express bridge. You can take the Jacobite steam train across the bridge, but driving through the viaduct is just as enchanting, with plenty of opportunities to stop along the way.

From here, it’s a short drive to Glencoe to visit Loch Shiel, or the ‘Black Lake’, famous for being the location of Azkaban prison and the view from the lookout point at the Astronomy Tower.

Potter fans will need to have tissues at the ready for Lochaber, the next and final stop; it’s a sad one. Loch Eilt and Eilean na Moine are the backdrops to some of the most emotional scenes, including Buckbeak’s execution. It was also where He Who Shall Not Be Named stole the Elder Wand.

The drive back to Edinburgh from Lochaber is around four hours, so we recommend you take advantage of our one-way car hire and apparate home!

We know how difficult getting the right Instagram shot can be. A #RentalRoadTrip to the Trossachs and travelling around the Duke’s Pass loop will take all that stress away. No need to worry about lighting or filters because Mother Nature’s got you covered.

The Trossachs form part of the Loch Lomond and The Trossachs National Park, one of Scotland’s National Scenic Areas, and is described as an area of outstanding natural beauty.

The Duke’s Pass, a seven-mile road public road between Aberfoyle and Loch Katrine, was said to have been built by Queen Victoria so that she could admire the breathtaking views of the mountains.

To get the most out of the famous royal road (and for extra Insta opportunities) drive the loop from Port of Menteith, via Duke’s Pass, to Callender.

End the day by heading to Three Lochs Forest Drive and capture the sun setting over the mountainous Ben Venue for ultimate road trip #goals.

In the Trossachs you really are spoiled for choice and who knows –  you may find yourself getting too lost in the natural beauty and forget to take pictures…or not!