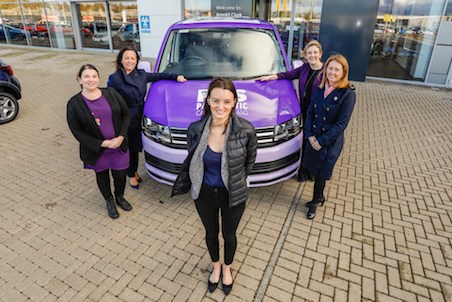 The charity hopes to educate and engage the public this November for Pancreatic Cancer Awareness Month. Their aim is to raise awareness of the symptoms and risks associated with pancreatic cancer.

Pancreatic cancer is notoriously hard to diagnose because the subtle symptoms can often be dismissed as something less serious. This explains why, out of all the major cancers, pancreatic cancer has the lowest survival rate.

The PCS seven-city tour kicks off in Glasgow on Thursday 8th November at Buchanan Street, and finishes on Friday 20th November in Dundee. You can find more details of the tour here.

Fiona Brown, Development Manager for Pancreatic Cancer Scotland, said: ‘We’re really grateful to Arnold Clark Car & Van Rental for this donating this fabulous new van. It’s so eye- catching, especially with the colour purple, which is the colour associated with pancreatic cancer and will really help with our mission to raise as much awareness as possible.’

If you spot the purple van make sure to ask lots of questions and find out more about the signs, symptoms and causes of pancreatic cancer. Tell the PCS team and volunteers we sent you, and be sure to send us a picture of you with the PanCanVan.

Can’t make it to any of the cities for the PanCanVan’s tour? Watch out for major landmarks being lit up purple to support World Pancreatic Cancer day on Thursday 15th November.