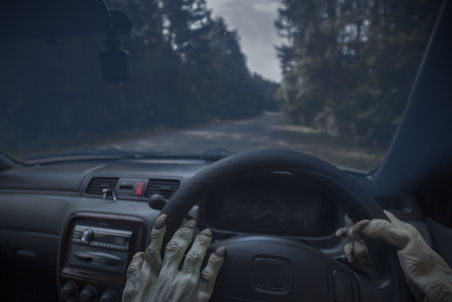 The UK’s most haunted roads

If you’re a fan of the supernatural and fancy yourself as an amateur ghost hunter, then why not take your next #RentalRoadTrip across some of the country’s most haunted roads? Be warned, these spooky routes are not for the faint hearted. Travel with caution – you might pick up a few unusual hitchhikers along the way...

The 15-mile stretch from Annan to Dumfries has been terrifying drivers for years, giving rise to its nickname, ‘The Ghost Road’. Recorded 999 calls reveal several distressed drivers reporting to have run over an old man dressed in tweed crossing the road, only for him to disappear when they get out of the car. Drive the poorly-lit stretch form Gretna through to Annan… if you dare.

If any road was going to be haunted, it was always going to be the A666 – the number of the beast. Several accidents have been caused by sightings of a hunched-over figure limping at the side of the road along the Devil’s Highway. Known simply as the A666 ghost, dashcam footage from 2015 revealed a white creature appear out of nowhere on the deserted road. The video shows the figure slowly approaching a terrified driver while the passenger cries for help.

On the 19th November 1965, a young bride-to-be was tragically killed in a road accident on the Blue Bell Hill on the eve of her wedding. Wearing a white wedding dress with a long veil covering her face, the woman stands hitchhiking at the side of the road. Numerous drivers claim to have given the 22-year old bride a lift, for her to simply disappear from sight after getting out of the car.

If ghosts and phantom brides are just a little too terrifying, this one might just be for you. If you turn off your engine on the Electric Brae, your car will magically roll uphill. It was named ‘Electric Brae’ by the Victorians, who feared it was electricity that was causing what we now know to be an optical illusion. Known locally as Croy Brae, the stretch of road brings in hundreds of visitors each year to experience the phenomenon. Visitors place their car in neutral facing downhill and the car begins to roll back up the hill instead of rolling forward.

A violent storm during the winter of 1879 caused the Old Tay Bridge to collapse while a train was passing over it. The six-carriage train plummeted into the ice-cold waters of the Tay and all 75 passengers on board were tragically killed. According to an old legend, on the anniversary of the disaster each year, a phantom train can be seen crossing the old bridge and locals report hearing the screaming cries of the victims. If your next #RentalRoadTrip takes you to the Old Tay Bridge, why not visit the new V&A museum in Dundee? Here’s more information about Scotland’s first design museum.