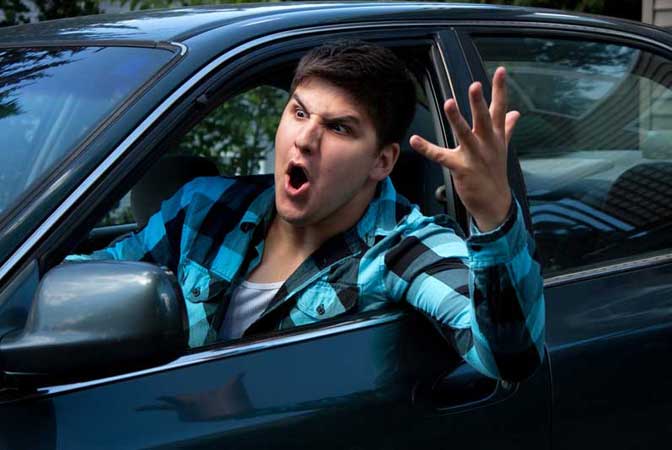 Psychology of driving: What is your driving style?

Every year, road accidents claim the lives of millions of people all over the world. According to government reports, in 2013 the number of accident casualties in the UK accounted for 2.3% of the population (Mais, 2014). In recent years, scholars carrying out academic and empirical studies of driving have started to distinguish between not only certain driving behaviours and habits, but also styles of driving. In hopes that this will help isolate certain dangerous driving styles and address them, researchers have studied drivers and their habits for the last two decades. We’ve conceptualised the four styles of driving by scholars Taubman-Ben-Ari and colleagues (2012).

Angry driving style
The so-called ‘angry and hostile style’ of driving is characterised by frequent expressions of road rage, irritation and hostile behaviours towards other drivers on the road. Such behaviours could include cursing, honking, flashing lights and so on. According to the study by Taubman-Ben-Ari and colleagues, this driving style was adopted more by men than women, especially by younger men. Of course, everyone gets angry on the road, however people who exhibit such driving styles are angry behind the wheel most of the time. Needless to say, angry driving is dangerous not only to other drivers on the road, but for the psychological and emotional health of whoever displays it. Experts suggest that when the feeling of anger arises, you should breathe very slowly and try to calm yourself down with a nice thought or some relaxing music. If you find yourself feeling angry most of the time, make sure to talk to a professional as this can save you a lot of problems in future.

Reckless and careless driving style
This driving style is also adopted by more men than women and again, age is a significant predictor – the older the driver, the less likely they are to drive recklessly. Similar to the angry style, the reckless driving style was adopted more by people who scored low on the agreeableness and conscientiousness personality traits scale (Costa & McCrae,1997). This style is probably the riskiest of all four and it is the main reason why researchers are devising tests to measure each style and thus isolate risky driving groups, such as young adolescents. The reckless driving style is categorised by speeding, extreme thrill seeking and deliberate violations of the driving norms and this is why it requires heightened attention. People who adopt this style tend to be fearless, enjoying risk and the rush they get from breaking the law, which translates into other aspects of life. Interestingly, some of the people who demonstrate it seem to be relatively calm in other situations, which means that this area needs a lot more research.


Anxious style
According to the study, this style is demonstrated by more women than men and is not dependent on age as much as years of exposure to driving; in other words, if you are a woman with little driving experience you are most likely to adopt this style of driving. It is not clear whether the little exposure causes the adoption of the anxious style or that people who demonstrate this style just choose to drive less in general. In some cases, this style can also be classified as dangerous because the driver is lacking confidence, often misjudges distances and speed of other vehicles and often drives very, very slowly. People who adopt this style tend to view driving as a tense, stressful experience, which poses a threat to their life, regardless of the driving situation and context. Our advice is that if you view driving in this way too and worry excessively, you should talk to someone you trust or a psychologist, who can help you overcome this anxiety.

Careful style
This style is seen more often in women than in men and more in older people than younger. The careful style is characterised by consideration for others on the road, less thrill seeking and a high value of carefulness. People who adopt this style tend to be agreeable and warm, conscientious, sensitive and capable of coping with anxiety in a healthy way. In general, this style is adopted by people who don’t seek sensation or thrill excessively, which translates into calm and confident driving.

Do you recognise yourself in one of these driving styles? Let us know!