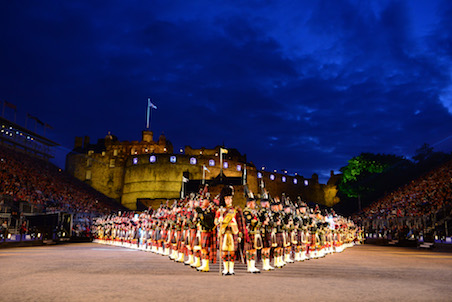 We’re the official vehicle supplier of the Edinburgh Tattoo, providing 18 cars to transport equipment and performers for the duration of the event. The fleet of vehicles, covered with specially designed Edinburgh Tattoo livery, will be used throughout the capital during the week-long event.

The Tattoo has been a staple in the Edinburgh Festival for more than 65 years. Performers from the British Armed Forces and military bands from around the world entertain the hundreds of thousands of visitors who attend the event each year.

Margaret Spiers, Operations Manager for Arnold Clark Car & Van Rental, said: ‘We’re delighted to be one of the official sponsors of an event as prestigious as the Royal Edinburgh Military Tattoo. More than 220,000 people are expected to attend so the Tattoo gives a major boost to the Scottish tourism industry. We’re excited to be a part of such an important Scottish cultural event.’

If you’re attending the Edinburgh Tattoo this year, why not hire a vehicle from Arnold Clark Car & Van Rental? You’ll find us in all major Scottish airports, which makes hiring with us the perfect way to get to the Tattoo. Those attending the event this year will receive a 20% discount on car hire - just let the staff know when you’re booking!