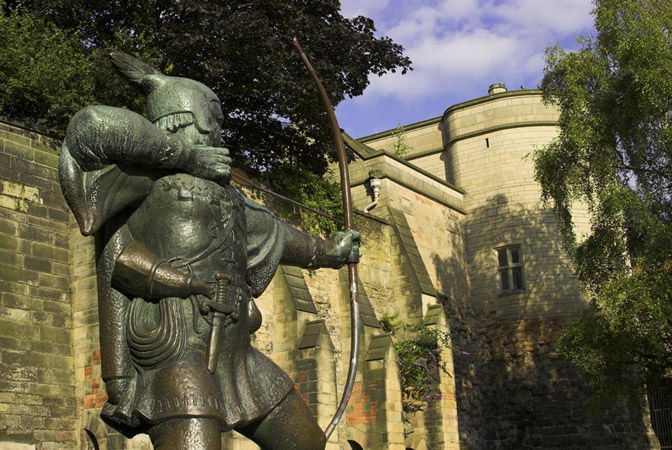 Top 8 things to do in Nottingham

Nottingham may be famous for its connection to Robin Hood, but look beyond the myth and you’ll discover some legendary attractions.

With a rich heritage, beautiful parks and captivating museums, there’s so much to see in Nottingham. The capital of the East Midlands has plenty to offer for a family day out or an exciting weekend getaway.

Beneath Nottingham, there’s a system of more than 500 man-made caves dating back to the Dark Ages. Enter at Broadmarch Shopping Centre and travel back in time through the Anglo-Saxon tunnels to discover how these caves were used from medieval times right through to the 1940s. You can enjoy a guided tour or an audio guide to help you get deeper into the history of the caves, and find out more about those who occupied them.

Nottingham Castle stands in a commanding position above the city, providing stunning views from within the grounds. This magnificent 17th century mansion is located on the site of the original medieval castle and has a rich and turbulent history tied to royalty and civil war. Today, the castle is a museum featuring a range of galleries showcasing both international and local fine art, as well as a wealth of Nottingham history. You can also take a guided tour of the caves beneath and discover King David’s dungeon and the Duke of Newcastle’s wine cellar.

There are six acres of picturesque Victorian Gardens for visitors to appreciate as well as a medieval playground, making it the perfect spot for a family day out.

The National Justice Museum is a former courthouse and jail, making it the perfect venue to get locked up for a day and learn about crime and punishment. The museum has undergone a £1million renovation thanks to a Heritage Lottery Fund grant, meaning there are more even more law and justice artefacts and interactive exhibits to enjoy. Explore the history of prison reform, what it was like aboard a convict ship, and find out how the legend of Robin Hood began.

Find out more about the National Justice Museum.

Wollaton Hall is a charming Elizabethan Mansion house surrounded by stunning grounds. Within the hall, you can find carefully restored period rooms showing the changes to the hall over time. Since the house opened to the public in 1926, it has hosted Nottingham’s natural history museum.

The museum includes four galleries with more than three quarters of a million specimens, including museum mascot George the Gorilla, who surprisingly has his own Twitter account.

Nottingham Industrial Museum can be found in the old stable block at Wollaton Hall and boasts an impressive collection of machinery and artefacts dating back to the 17th century. The museum celebrates the industrial history of Nottingham and the local area, with galleries dedicated to transport, textiles, communications and steam. If you have any questions about any of the machines, the enthusiastic volunteers who run the museum will be delighted to share their knowledge.

Take a spin around Green’s Windmill, where you can see a fully restored example of a 19th century windmill and learn first hand how flour is made. And if you like your flour freshly ground, you can even buy some! Discover the story of the windmill’s famous inhabitant, George Green.

Although not widely known, Green became one of the most influential mathematicians and theoretical physicists of his time. You can find out more about his achievements and experiments in the science centre next to the windmill.

Nottingham Arboretum is the city’s oldest park and was officially opened in 1852 following years of planning. The park is home to more than 800 trees, including some that were planted when the park was originally founded. This is the perfect sanctuary inside the city, where you can enjoy a stroll down the connecting walkways and spend time getting to know the park’s inhabitants at the duck pond and in the aviaries.

Find out more about Nottingham Arboretum.

If you’re lucky enough to be in Nottingham on match day, you’ll be bowled over by a visit to Trent Bridge, home to Nottinghamshire County Cricket Club. A number of new stands have been constructed over recent years to bring the capacity up to 17,500 and it’s generally regarded as one of the best places in the world to watch cricket, whether it’s a county match or an international test.

Find out more about Trent Bridge.

Book a car in Nottingham today.