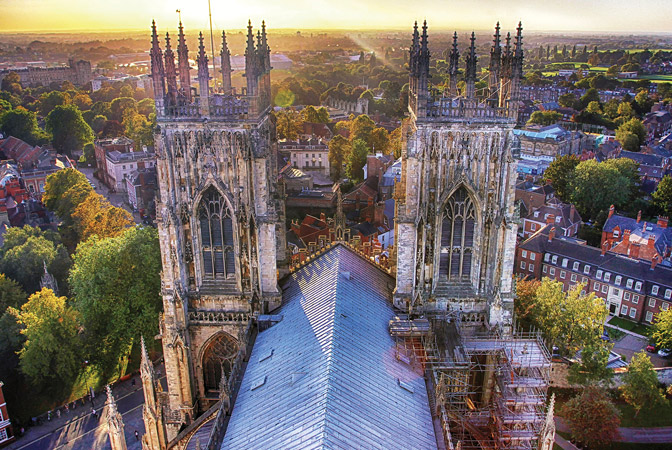 Top 9 things to do in York

York is one of England’s most picturesque cities with a rich heritage and great range of attractions within its walls.

If you’re planning a road trip in the north of England, then York is one of the country’s must-see tourist destinations. With perfectly preserved streets and an unrivalled range of museums, York is the ideal destination for history enthusiasts. But whether you’re a curious culture vulture or a family with young children, there are plenty of engaging attractions to enjoy in the city all year round.

York Minster (or the Cathedral and Metropolitan Church of Saint Peter in York to give it its proper name) is a huge 13th century church situated right in the heart of the city. This impressive building features some spectacular gothic stonework alongside incredible medieval stained glass windows. If you dare to climb the 275 steps of the central tower then you’ll be treated to some magnificent views from the highest point in the city.

Even though the Minster is over 800 years old, you can delve even deeper into York’s past at the new state-of-the-art attraction in the Undercroft. Within the chambers underneath the Minster you’ll experience two millennia of history in the immersive interactive chambers under the cathedral. Here you can explore the history of the site from the days of the Roman Empire through to the present day with artefacts and archaeological finds showcased using the latest technology.

York Minster is open every day for both sightseeing and worship.

The Shambles is one of the best-preserved medieval streets in Britain. It’s the perfect place for a stroll and to soak up the historic atmosphere of York and enjoy the quirky architecture of these overhanging timber-framed buildings. Shambles is an old term for meat market and at one time this street was filled with butchers, but today it features a range of tourist-friendly shops, cafes and attractions.

Jorvik Viking Centre has recently undergone a multi-million pound upgrade following flood damage, and with its reopening in spring 2017, it promises to be better than ever. The centre was first opened in 1984 by the York Archaeological Trust to showcase the Viking finds following an incredible city centre dig which uncovered a staggering 40,000 artefacts including pottery, metalwork and textiles. Jorvik has always been more than just a conventional museum with a range of interactive exhibitions and exhibits to help visitors truly understand what Viking life was like in northern England.

Located on the site of York Castle built by William the Conqueror, York Castle Museum hosts a wide variety of exhibitions in its galleries covering 700 years of history. Experience York through the ages with a walk down a reconstruction of a Victorian Street, or discover what the city was like during the First World War or the 1960s. You can even relive your childhood with a gallery dedicated to children’s toys from the last 150 years. There’s so much to see that you might just need a return visit to take it all in.

Those who want to explore some of the more gruesome aspects of York’s history can satisfy their dark side and have fun at the same time at York Dungeon. Within these immersive settings, visitors can step back in time and interact with actors playing some of York’s most famous historical characters, including Guy Fawkes and Dick Turpin. A range of time periods are featured, from 19th century bars to 15th century executions via a plague doctor’s surgery in 1551. Experience the sights, smells and scares of York’s past and you might even learn something along the way.

Since the Romans first constructed defences in 71 AD, York has been a walled city. The walls that remain today were mostly built between the 12th–14th centuries and encircle the entirety of the medieval city. There are 45 towers along the way as well as five main gateways. If you feel like a challenge, then you can complete a the 2.4 kilometre circuit in around two hours and you’ll be able to walk along some sections along the way, and enjoy stunning views of the city.

The Mansion House is located in the heart of the city on St Helen’s Square and has served as home to the Lord Mayor since 1732. As well as acting as an entertainment space for visitors and to host civic collections, the Mansion House is also open to the public. Tours are available around this incredible space where knowledgeable guides will share the rich history of the rooms and artefacts on display. Following a £1.5 million restoration project, the Mansion House reopens to the public in late spring 2017.

At the vast National Railway Museum, you can explore the 300 years of locomotive innovation. The collection features more than 1,000,000 artefacts with posters, railway buildings, signalling, and a huge variety of engines and rolling stock. Highlights include the beautifully restored Flying Scotsman, a replica of Stephenson’s Rocket, a Japanese bullet train, and the stunning art deco Duchess of Hamilton. For younger visitors there’s a great outdoor play area which includes a miniature railway. Best of all, entry is free!

The history of York is rich and also delicious. This museum tells the story of York’s association with this sweet treat beginning in the 18th century as Quaker families opened chocolate shops. Over the next three centuries, Terry and Rowntree would become household names and put York on the map with their famous confectionary creations. Beyond the history, you’ll discover exactly what goes into transforming the cocoa bean into delicious chocolate and get expert insights from the museum’s resident chocolatiers.

Book a car in York today