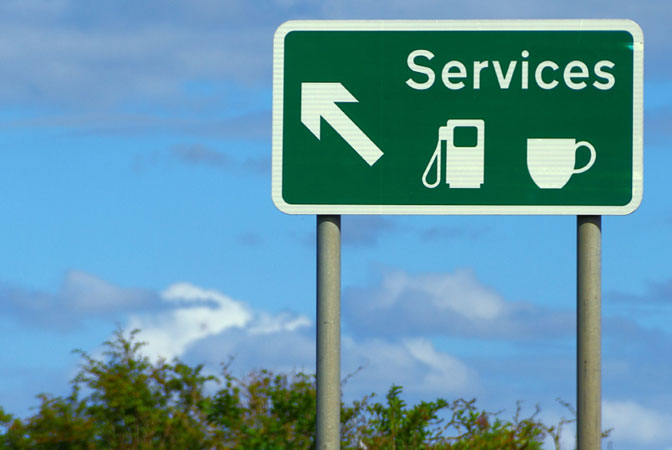 Motorway services that’ll stop you in your tracks

Britain’s motorway services aren’t always known for their quality, but we’ve found some hidden gems worth visiting during your next road trip.

Motorway services are all the same, aren’t they? Burger King , Costa , a shop selling oversized bags of Hula Hoops, a deserted amusement arcade and toilets that were last cleaned by Barbara at 12.17pm (as if, Barbara).

However, not all service stations are created equal. In fact, some of them are hidden gems, boasting unusual architectural features, picturesque natural beauty and home-grown food. So when you’re on the road, make sure you stop for a break at one of these places…

On the M6 in Cumbria , there is an oasis for discerning travellers who like the finer things in life. Tebay, also known as Westmorland Services, has been a beacon of roadside independence since 1972, when it was founded by local farmers John and Barbara Dunning. What started out as a 30-seat café has grown into an impressive business. Following a stylish rebrand in 2014, Tebay is now a destination in itself, with a farm shop selling everything from locally sourced meats and cheese to Tebay-branded craft beer. It’s not cheap (£3.99 for a sausage roll, anyone?) but the quality is so good, you won’t care, as you eat delicious homemade cake overlooking a panoramic lakeland view.

Forton – further south down the M6 at Lancaster - isn’t pretty, but it does have something very special: a Grade II-listed hexagonal tower. Built in 1965, it’s an enduring example of 60s modernist architecture. Known as the Pennine Tower Restaurant, it was modelled on an air-traffic control tower, with the intention to bring a bit of jet-set glamour to the road. Once, it offered visitors a bird’s eye view of the motorway as they dined, and a sun deck for relaxation. Now, sadly, it’s only used for storage, but it’s still an eye-catching relic from the days when Britain’s motorways seemed new, shiny and futuristic.

It’s hard to impress the vociferous restaurant critics on TripAdvisor, but Cobham services on the M25 has done just that. Cobham cost £75 million to build in 2012, and occupies a previously unserviced stretch of the M25 between Heathrow and Gatwick. Peruse the huge airport-style food court, serving everything from Mexican food to a Sunday roast, experience the glistening toilets, and grab a box of Krispy Kreme for the rest of your journey. It’s even got a laundrette in case you fancy putting your clothes in for a service wash as you have a coffee on the lakeside terrace or wander through the landscaped grounds.

Gloucester Services, which opened in 2015, is the latest acquisition by Westmorland, and could be described as the ‘Tebay of the South.’ Using the same design blueprint – an airy restaurant, excellent farm shop, delicious baked goods – it’s a rural foodie paradise, despite the M5 roaring past outside. The new owners have joined forces with 130 Gloucestershire food producers , so you can sample cheese and yoghurt from local farms as well as Gloucester pork, artisan jams, Severn Valley apple juice and fresh bread from the Hobbs House bakery in Bristol.

As you drive on the A90 between Dundee and Perth, you’d be forgiven for thinking you’re hallucinating as you see an enormous cow on the horizon. Yes, that IS a fibreglass bovine beast on the roof, and it’s a sure sign you’ve reached the Horn Milk Bar, a restaurant that offers a signature bacon roll called the ‘A90 Behemoth’, which features a staggering 10–15 rashers of pig.

To add to its quirkiness, the diner also served as a location for a fashion shoot which featured in the September 2016 issue of Vogue . Currently in the process of moo-ving (sorry), the all-new Horn is set to be bigger and better than before, as the owners have received council funding to build a new 24-hour premises 100 metres further up the road. Luckily, the cow will be staying firmly on the roof.