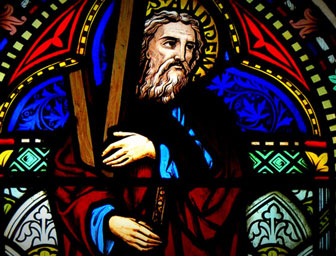 Today we celebrate Scotland’s national day - but who was St. Andrew?

Every year, on the 30th November, Scots (and Scots at heart) celebrate St. Andrew’s Day. Many things in Scotland’s history, including its flag are connected to St. Andrew’s life and death. We take a look at his extraordinary story.

Life and death of St. Andrew

Historical sources state that Saint Andrew was a Galilean fisherman and his younger brother was Saint Peter. He was famous for his ability to bring people together to spread the Christian faith. According to the Bible, Jesus asked the brothers to be his disciples and become ‘fishers of men’ and they became his closest disciples, taking part in the Last Supper, alongside the other apostles. Saint Andrew is also said to have been crucified on an X-shaped cross (called the Saltire) by the Romans, which made him a martyr. Legends say that Saint Regulus then travelled by sea from Greece to St. Andrews in Fife with his remains.

In later centuries, St. Andrew played an important role in the formation of Scotland when he became its patron saint. Back in the 1300s, Scots appealed to the Pope for protection, as they wanted to avoid being conquered by English kings. They claimed that they were the descendants of the Scythians, who lived on the shores of the Black Sea (now Bulgaria) and who were also Saint Andrew’s people. Scots took inspiration from St. Andrew’s Cross and adopted the Saltire as their flag. Interestingly, the first person to recognize this flag was the Roman emperor Constantine the Great, who saw the symbol ‘X’ in the light of the setting sun, followed by a dream of victory in the upcoming battle. Similarly, King Angus of the Picts had a vision of the Saltire in the sky and won the battle against his enemies.

Both William Wallace and King Robert the Bruce, two legendary figures in Scotland’s history, took inspiration from Saint Andrew and wore the Saltire on their clothes. By the year 1600, the flag was on Scottish coins and ships and was displayed at funerals of King James VI and Mary, Queen of Scots.

As St. Andrew is also patron of Romania, Georgia, Cyprus and Russia (to name but a few), he is celebrated around the world, and people take pilgrimages to where he was born and lived. In Scotland, St. Andrew’s Day is celebrated with traditional Scottish food and dancing. The Saltire Festival, which takes place throughout East Lothian, features traditional games, live music and various historical experiences. There are tributes in every Scottish town, such as the St. Andrew’s Day Torchlight Parade in Glasgow and St. Andrew’s Day Fusion Festival in Dundee. Full list of celebrations can be found here.