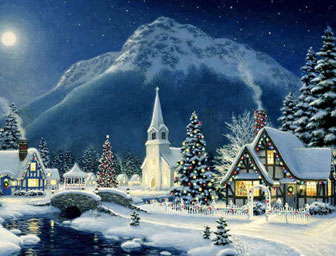 Around the world for Christmas

Traditions all around the world for Christmas

Around the world, everyone has their own festive, family traditions – and some are more unusual than others! So sit back, relax and enjoy some rather strange and beautiful Christmas traditions around the globe…

Did you know that in Japan their Christmas tradition is to eat Kentucky Fried Chicken on Christmas Eve? Unusual, right? Well, this tradition caught on after a major advertising campaign in 1974. At the time, KFC and McDonald's were trying to make it big in Japan, and the advertisers found out that turkeys were in short supply on Christmas Eve. So they created a campaign with the slogan. 'Christmas = Kentucky' and the public caught on. In the 70s, a chicken bucket and a bottle of wine cost 920 yen, which is about £10/£15, a lot of money in those days. Now KFC advertise the 'three C's', which are chicken, champagne and cake, and it's estimated that 3.6 million Japanese households order KFC on Christmas Eve.

2. Leave your shoes out in Germany

On the 5th December, children in Germany place a pair of shoes outside on their doorstep, as they believe St. Nikolaus and his servant Knetch Ruprecht will fill the shoes with treats. Only if you're good though – bad children will wake up with twigs in their shoes instead of yummy treats. This is known as St. Nicholas's Eve. Also, on Christmas Eve, Germans have a tradition where they have to eat as much as they can. This is called 'Dickbauch' meaning 'fat belly', because they believe if they don't eat a lot, they will be haunted by demons during the night. (Demons are definitely not Christmassy.) The traditional meal to eat on Christmas Day is roast goose.

In Ukraine, it is not traditional for a Christmas tree to be decorated with baubles and tinsel. No, it has spiders and spider webs wrapped round it instead. Here we associate spiders with Halloween, however, in Ukraine. this festive tradition is based around an old folk tale about a family whose fir tree was bare as they had no money to pay for decorations. On Christmas morning, the family woke up and found that there were spider webs wrapped around the Christmas tree.

4. Witches instead of Santa in Italy

Unlike in this country, in Italy, Santa is not the gift giver. In actual fact it is ‘La Befana,' meaning ‘the witch'. This (good) witch brings gifts and sweets to good children – however, bad children receive coal in their stocking. Children leave out wine and a piece of salami for La Befana. This ancient tradition is based on a Christian legend. The story of ‘La Befana' shows that the three wise men stopped at her house to receive shelter and food. For her kindness, they asked her to join them on their trip to meet Jesus Christ. She kindly declined and the three wise men left. However, La Befana changed her mind and packed up some old toys that used to belong to her children that had died, and set out to follow the men. Unfortunately, the good witch could not find them and so it is said that she left the gifts for children to wake up to.

Weeks before the big day, people hang decorations and lights outside and inside their house. A tradition in America is to have mistletoe hanging and if two people stand underneath it they have to kiss one another to celebrate. Christmas day in America is a public holiday meaning most businesses and schools are closed, and it's a tradition that either on Christmas Eve or Christmas Day, Christians attend mass in order to celebrate the birth of Christ. A Christmas dinner traditionally consists of turkey, and Santa is a big part of Christmas for children. They leave out a beer for Santa and a carrot for Rudolph on Christmas Eve before bed. Santa will leave coal for bad kids and gifts and treats for other kids. Does all this sound familiar?

6. Hide the broom in Norway

Christmas Eve is when all the fun takes place, including a Christmas feast and lots of games. Also, families exchange gifts in the evening. In Norway Christmas sounds a lot like Halloween here. On Christmas Eve, it's a tradition for Norwegians to hide all brooms and brushes in the house, fearing that witches will steal them overnight. On Christmas Day, many attend mass, then shortly after children visit their neighbours to sing Christmas carols. Very festive, don't you agree?